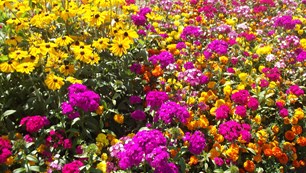 Representatives of the Yeovil in Bloom team received the gold award at the presentations ceremony at the Imperial Hotel in Torquay.

The Yeovil in Bloom initiative is managed and funded by Yeovil Town Council and delivered with the support of South Somerset District Council (SSDC).

Yeovil Country Park which is managed by SSDC’s Countryside Team, was awarded the London & Manchester trophy for Outstanding Contribution to the Environment.

There were more awards across the SSDC area with Wincanton’s CATCH community group - Community Action to Transform the river Cale Habitat - winning an “outstanding” It’s Your Neighbourhood award and Milborne Port succeeding with Silver Gilt in the In Bloom competition and also receiving the Serco Cup for Best Community Initiative.

Ash and Langport received Silver Gilt awards, and Curry Rivel Silver, in the New for 2017 category.  Langport was also Best New Entry in the Viv Verrier Cup and Curry Rivel received the City of Bath Trophy for landscaping.

The following entries were nominated for Best Portfolio: Ash, Langport and Yeovil, with Yeovil also nominated for the Best Municipal Display for St John’s Churchyard and Ash for the Art in The Landscape Trophy.

Councillor David Recardo, Chairman of the Yeovil in Bloom Steering Group said: “Once again we are extremely pleased that we have been awarded gold.  The five It’s Your Neighbourhood awards represent the passionate community based groups around the town.

“The competition isn’t just about floral displays.  We have to demonstrate a commitment to environment and community participation.  Thanks must go to Yeovil Country Park, Preston C of E Primary School, the Hub, Kenmore Drive, The Quedam and the shops in Princes Street who made up our tour.  We would not win gold without showcasing these groups.

“We must thank the people of Yeovil who really get behind In Bloom each year, endorsing what we do and supporting the floral displays on show.  We receive many kind compliments throughout the year.”

Lesley Jelleyman - Yeovil in Bloom Promotions Officer - added: “Community participation makes up 25% of the overall points for the South West in Bloom competition so it is important that we can demonstrate community involvement all year round.  There is increasing evidence to show that green spaces have a tremendous positive impact on people’s health and wellbeing, so activities such as gardening and community based projects are excellent for relaxation and mental stimulation.

“We know there are many community groups and villages who might like to take part in some form of project helping local people and the local area, so please get in contact with us and let’s make South Somerset even more bloomin marvellous.”